There’s no denying that scuba diving is an equipment-intensive sport. While many recreational activities require specialized gear, only diving carries humans into a watery realm that is able to sustain life due only to a complex system of purpose-built equipment that allows us to keep warm and breathe underwater while propelling ourselves through liquid that is 784 times denser than air. Of all the gear used by a well-equipped scuba diver, without a doubt, the most important is the compressed breathing gas and accompanying scuba regulator that permits a diver to comfortably and safely breathe while submerged.

Humans have ventured underwater for thousands of years by holding their breath and free-diving beneath the surface. But in order to remain submerged for more than a few minutes, it was necessary to find a way to deliver breathable air underwater. The concept of the “diving bell” was described by Aristotle more than two thousand years ago. This technology—trapping or pumping air into an enclosed space to provide air to a submerged diver—was refined and improved in the 19th and early 20th centuries. But it wasn’t until 1943 that Emile Gagnan and Jacques-Yves Cousteau invented a demand regulator which allowed a diver to breathe from an air tank carried underwater. The sport of scuba diving as we know it today was born.

All modern scuba regulators consist of two components. The first stage regulator connects to the tank valve, and reduces the air pressure from the cylinder’s fill pressure (typically 2400 psi for low-pressure tanks, up to 3500 psi for high-pressure tanks) down to an intermediate pressure of around 125 to 145 psi, depending upon the manufacturer and the specific regulator model. The first stage sends air at this reduced pressure through a low-pressure hose to the second stage regulator. At this pressure, the breathing gas is delivered to the diver when they inhale through the mouthpiece, which draws through the second stage of the regulator.

Both the first and second stage regulators function as valves, allowing the diver to inhale through the regulator mouthpiece and receive a smooth, steady supply of breathing gas with each inhalation.

The first stage typically has a number of additional threaded ports designed to deliver compressed air to additional hoses, each with a distinct purpose. Low-pressure hoses—often referred to as LP hoses—carry gas at the intermediate pressure of around 125-145 psi. They deliver air for the inflation of the diver’s buoyancy compensator device, or BCD. For a drysuit diver, a dedicated low-pressure hose plugs into the suit’s power inflator valve. Most regulators also supply a redundant second stage mouthpiece for sharing air with a buddy in an emergency.

In addition to these LP hoses, a typical regulator has at least one high pressure (HP) port which delivers air at a pressure equal to whatever is inside the tank. The primary purpose of the HP hose is to supply a submersible pressure gauge (SPG) or air-integrated dive computer. These devices display the current fill pressure of the dive cylinder, allowing the diver to monitor tank pressure (and remaining gas) throughout the course of the dive.

Inside both the first and second stages is a complex mechanism of springs, flexible diaphragms, o-rings, and other components which function together to bring compressed air or other breathing gas from the dive cylinder to the diver’s lungs dependably, with minimal physical effort from the diver. The regulator must perform these tasks as the ambient pressure changes from one atmosphere at the surface down to four atmospheres at a depth of just over 130 feet, and far deeper for divers with the appropriate technical training and skills. The regulator needs to deliver the same even, constant flow of gas whether the cylinder is warm and full, or partially drained and thoroughly chilled midway through a deep dive in cold water.

In the second part of this article, we’ll look at ways to ensure your scuba regulator performs correctly and talk about what goes into a professional regulator service.

This article was originally posted at Monterey Bay Diving. 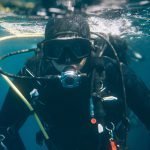