SAN FELIPE, Mexico, June 30, 2017 /PRNewswire-USNewswire/ — World Animal Protection, the International Committee for the Recovery of the Vaquita (CIRVA), and Monterey Bay Diving joined forces with local fishermen in San Felipe, Mexico this spring to locate illegal gillnets in critical vaquita porpoise habitat in the Gulf of California. The team used unique sonar scanning technology to locate illegal and discarded fishing nets likely to cause entanglement of the vaquita species and ultimately removed approximately 5,702 square meters of net. The gillnets recovered will be recycled by partners in the Global Ghost Gear Initiative founded by World Animal Protection, for use as nylon-based products.

The vaquita is the most endangered marine mammal on the planet with only an estimated 25 remaining animals left, all of them living in the Gulf of California.  The vaquita’s proximity to extinction is due to illegal fishing activity and the resulting abandoned gillnets, known as ghost nets. Nylon gillnets intended to catch a fish called the totoaba, a critically endangered species sold illegally in China where its swim bladder is prized for use in traditional medicine, entangle and drown the vaquita. As the illegal totoaba fishery ends for the season once the fish stock has migrated, the abandoned nets left in the shared habitat frequently snare and kill vaquitas. 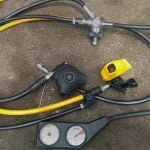