Lost and Found: Underwater Imaging as a Search Tool

Almost everyone who has spent significant time on or near the water has experienced an oops! moment when they’ve dropped a cell phone, a set of keys, a pair of sunglasses, or some other small but important item into the drink. As a diver, you may have set a mask or camera down on the dive boat “just for a second” and had it vanish overboard. Assuming you have a good fix on the position and conditions and gear to conduct a search dive, there’s a chance of retrieving the dropped item or finding goodies lost by some other hapless diver. But not always—it’s a big ocean out there!

But what about when something bigger and more expensive is lost beneath the waves? Our oceans, lakes, and rivers hold countless shipwrecks from all eras. Airplanes, automobiles, and small boats of all kinds can be found resting on the bottom. Outboard motors disengage from transoms and plunge overboard. Expensive anchors become entangled in debris and must be cut loose and abandoned. Lobster, crab, and shrimp pots are lost when the line breaks or the buoy becomes damaged—these so-called “ghost pots” may continue attracting and killing marine creatures for months or years.

Fortunately, underwater imaging technology can aid in locating sunken items as small as an outboard motor or as large as a cargo ship. Side-scan sonar uses sound pulses to “bounce” acoustic pings across the sea floor or lake bottom. This signal is received and translated electronically, then displayed as a graphic image on a video monitor. Unlike marine fish finders or sonar devices that transmit a signal from a transducer mounted on the boat, side-scan sonar works with a “towfish” that is pulled through the water from a boat. The depth of the sonar fish is displayed to the operator, allowing them to devise a search pattern targeted to locate the submerged object they’re looking for.

Unlike sonar pings from a boat-mounted transducer, the ability of the side-scan operator to “fly” the towfish well below the surface is a big part of its effectiveness. Imagine your were flying over the skyscrapers of a big city, looking down. You would see a bunch of rooftops, and if they were far enough below, you might not even be able to make out where one building stops and the next begins. You certainly would have no clue how tall the buildings are.

Now picture a drone flying low through this same city, looking left and right at the massive walls of glass and steel zooming by on either side. The scale of these structures would be clear, and at this altitude, you would be able to spot the skyscrapers from miles away. The side-scan towfish works in a similar fashion, painting an electronic picture of the sea floor or lake bottom looking from the side, not just straight down. Viewed from this perspective, even a relatively small object like an abandoned crab pot jumps out when the towfish passes closely enough to capture an image.

Side-scan sonar is not the only technology for locating shipwrecks and other submerged treasures. Although underwater metal detectors and marine magnetometers both have their place under certain search conditions, side-scan “sees” objects even if they are not made of ferrous metal. A fabric-covered, aluminum-framed aircraft sitting on the bottom of a deep lake would be invisible to a magnetometer, but the side-scan would yield an unmistakable image of the plane. Sunken logs, piles of rock ballast from an ancient shipwreck, collapsed bridges, and even the bodies of drowning victims have been found using the power of advanced underwater imaging.

The underwater imaging experts at Monterey Bay Diving have experience conducting searches and surveys in a variety of marine environments. Whether you’ve lost an anchor or an entire vessel, there’s a good chance we can help find it. Contact us today and let us answer your questions about the bottom-painting technology that can help turn “lost” into “found”! 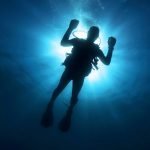 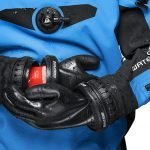